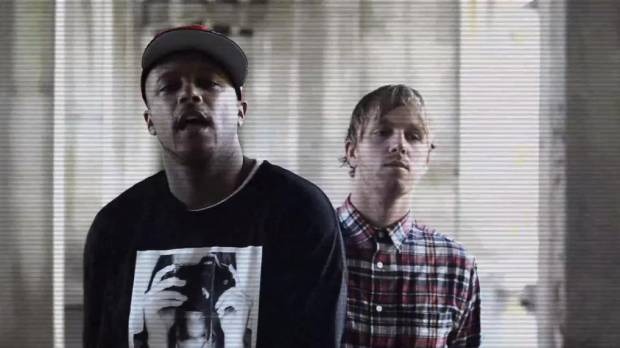 Seattle's Sadistik, aka Cody Foster, pays tribute to the late Micheal “Eyedea” Larsen's 2010 CD-R, When in Rome, Kill the King with the debut of his video for "Kill the King", featuring and directed by Deacon the Villain with fellow CunninLynguist and beatsmith, Kno. Foster entertains the sweetest joys of revenge by exorcizing the demons to seek and destroy by embracing his inner Goliath while carrying the torch for a fallen friend. "Philistine think-patterns that I fight until I bleed, still I weave dream catchers just so I can steal your dreams, Eyedea told me, 'Kill the king'—I don’t feel a thing now".

The video follows the Johnny Cash t-shirt clad Tamika Shannon and her crowned kingpin Joe Richards in between Sadistik and Deacon's rhyme and song inside an abandoned, cinder brick warehouse. With the vibe tense, the wall scrawled graffiti courtesy of Baels is shown in brief flashes to accentuate both the immediacy and intensity of lyrical fragments like "revenge", "die", "poison", "kill me", "chupacabra", "monster", "bleed", "every thing", "alone", "highs and lows", "suicide", "6,000,000", "ego", images of crowns and a hangman's noose. Grounding Cody's fratricidal dilemmas is Deac's smooth operating chorus hook, casing out the throne with watchful eyes. "I give up everything I’ve ever had, give up everything I’ll ever be, throughout my life, I’ve done the illest things, to pay that price, I gotta kill the king".

To the beat of Kno's piano based sample, Sadistik drops the alliterative consonance with bars like, "pick and pick your perk or poison, while I play the prick again to pin your picture perfect ploy on". Like the final shot of Tamika's hand mirror reflection of her new found inner queen claim and discovery; Cody's quest and rhymes display the inner reflective thought process of questions, bi-polarities, and frustrations with quick dismissive jab to L. Ron Hubbard's sci-fi metaphysics. "Why am I alone feeling violent inside my skull, it's all golden, the silence that is mine to own, Dianetics I suppose, side effects of highs and lows, ups and downs, come arounds, spider webs inside my home". Sadistik's telling of a life on the ropes or in the noose discards the film metaphor facades of "slow cuts and bad scripts" with the advice to "hang in there", making a case for self-coronation in the Machiavellian style of Richard the III.

Sadistik's album Flowers for My Father is available now from Fake Four Inc.