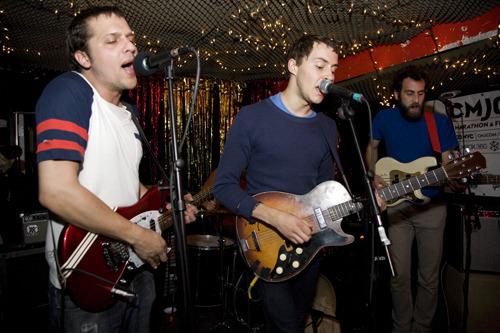 In which a band with an amazing studio album has something to say live.

The self-titled record by Women that I've listened to regularly since receiving it months ago had always sounded to me like a studio blip, a lucky coming-together of chance elements: sinewy inter-playing guitar arpeggios, boom box drum beats, hollowed-out, billowy vocal melodies. I fully expected their live set to be a complete mess in comparison to what I consider to be a nearly flawless studio outing.

So after a night of eh's, whoopsies, and mind-numbing crap sets, I was whoozily pleased to be faced full-on with the full-sized, real life rock band version of what, in fact, is not only studio diddling. Rougher, grittier, messier, yes. But the slightly de-tuned guitars and rhythmic nudges towards chaotic breakdowns were held together stoically at mid-tempos by their bean pole drummer, and their front man's casual attack was completely charming.

Women may not be breaking new ground, but they're tilling fallow soil in the interplay they utilize between the melodic tendencies of someone like Caribou with the noisy guitar-dueling intonations of fellow contemporaries Abe Vigoda, along with the lofty and ambitious guitar virtuosity (though without the showmanship or obvious display of tempo-trickery) of Dirty Projectors. Perhaps I'm getting too excited.

They are playing about 900 more times, and, as they noted, they'd already played the Cake Shop, where I caught them, about 900 times previously, in the past few days. Catch 'em, while they're here.