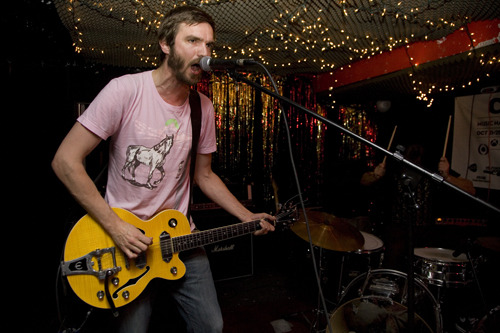 In which we wander aimlessly between two nationalistic showcases. Sort of.

[The Moi Non Plus, Dutch band at large. All photos in this post by Hatnim Lee.]

Perhaps, in my obnoxious sense of fun, my favorite thing about the showcase for Netherlands-based zine Subbacultcha! was the cover of their latest issue, which announced:

And while Deerhunter is sort of from Brooklyn in the same way that we are all Berliners, or we are all comptariots of the underground scene, of which Brooklyn is a necessary nexus, credit goes to the Dutch zine for actually attempting recognition of the goings-ons across the pond.

Canada's showcase, on the other hand, was actually sponsored by the New York-based Canadian consulate, and featured, among others, a soft-heeled band called Karkwa with two drummers that sang in French, and a Kenyan-Canadian rapper named Shad who has toured with Lupe Fiasco.

The first two acts I caught at the Netherland folks' shindig were liberatingly heavy, particularly Bonne Aparte, a band that's caged the power of extreme dynamic shifts for their blistering rapid attack songs. I think members of that Dutch band were also in on of the funniest bands I've ever seen, Adept, whom I wrote about separately for my very special “Worst of CMJ” series.

The irony, for probably only me and my photographer (because who else was wandering between these two showcases, after all?), was that the best band of the night was Canadian, playing at the Dutch showcase. You can read more about Women for my very special “Best of CMJ” series.