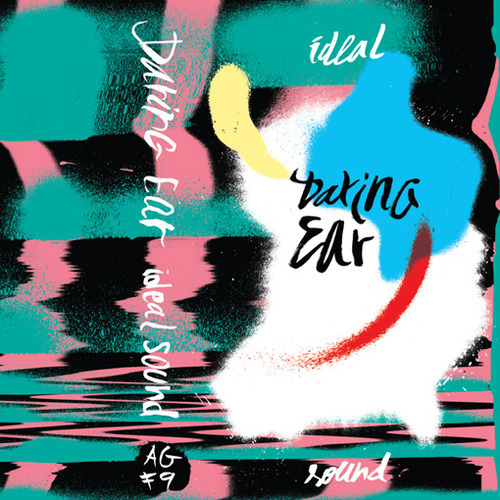 There was really no way I wasn't going to review this tape. First, I happen to really enjoy the pop tunes created by Aaron Deer, but also… it was somehow destiny. This cassette tape originally came in the mail courtesy of Costa Carlos of the label A Giant Fern, along with a nice little note. It went much appreciated. I spun the tape often in my favorite tape spinning device until one day, the tape spinning device suddenly and viciously murdered its unassuming passenger. That's right, before I had the chance to lay these words down in the very post you're reading, R2D2, robotic bastard that he is, spoiled the entire thing. It was by divine intervention only, then, that the tape made its way back into my inbox thanks to the recently departed Foxy Digitalis, who included the tape in the last box mailed to me before Brad closed its doors last week. Since it is clearly divine intervention that brought me and this beautiful little tape back together and I'm able to sit here on my couch, take in and enjoy these songs as they are meant to be, I feel it is my complete duty to report my joy for Daring Ear to some audience. That audience is you.

Aaron Deer's music fits loosely into the “bedroom pop” category, as everything sounds spare and simple with electronic beats and synth-based compositions featuring his endearingly shy vocals boldly (and wisely) shoved out in front of the mix. After the first few listens, nothing on this tape felt especially momentous and revisiting the record doesn't really produce any moments of shocked awe. In their stead, Daring Ear's effect has been more subdued and infinitely more lasting as little nuances revealed themselves over time, how the sounds all blend so effortlessly into liquid mosaic, Daring Ear's obvious affinity with sheer ambient music, that bit of vibraphone that bobs about on the mix's wavy surface from time to time, or the way the beat from Big Boi's “I Like the Way You Move” makes an appearance (whether intended or not… speaking specifically of “The Reach” here).

The production sounds simple at face value, but in actuality shows nice depth. Each song carries a weightless float with hypnotic, repititious grooves beneath a bubble bath of synths for the melodies to softly sink into. And oh, the melodies — nicely written and super sweet, yes, but more importantly, they're actually memorable. And I actually mean actually memorable, as in it hasn't been an uncommon occurrence for me to be humming tunes like “Might is Right” after being long out of reach of my tape deck, something that seems rare in this day and age. The mood throughout Ideal Sound is varied and shifty, sometimes cold and spooky and at others incredibly warm and comforting as the dark and dour “You'll Offer Me” slips its way nonchalantly into the gorgeous “Shined.” But dichotomies like that only makes things like the collage of colors on the front cover and little ironies riddled about the tape make some more sense somehow… like Deer tagging the project as “daring” given the general softness and delicacy of it all, or the fact that whatever bedroom setup his months of scraping spare change together produced to record this album may not in fact be considered “ideal” for many… and yet, Deer has created, as if by magic, a surprisingly addictive and downright lovely collection of music that fits all these bills regardless. This thing, to Deer who's spent the last several years floating in and out of various rock groups, is probably totally daring. And I'll be the first to admit that the results are more than ideal.