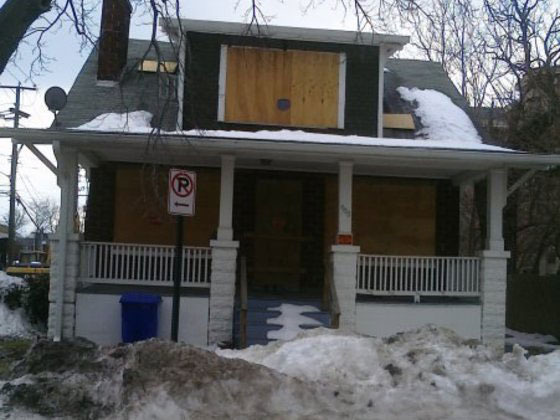 Born and raised in Arlington, VA (and making the big jump over the Potomac into D.C. proper in my 20s), I've seen both D.C. and its suburb Arlington make some stark changes in the direction of (wait for it) gentrification. As readers of Impose know, a major gentrification benchmark is vast changes made to a neighborhood's housing market. Old houses get torn down, rent goes up, etc. Usually when people imagine gentrification victims, it's families and/or older people that have lived in the neighborhood for decades, not a hodgepodge of 20-something educated artists. But causalities come in all shapes and sizes as the story behind Kansas House shows.

Quick history lesson: A large part D.C.'s influencing music scene of the 80's and 90's (Dischord, Teenbeat, Simple Machines) took place in the suburbs of D.C., most specifically Arlington (trust me I was shocked upon learning this at thirteen when I saw Ian MacKaye at a local coffee shop). Why? Well for a myriad of reasons as Aaron Leitko points out in “The Orange Line Revolution” (Washington City Paper 12/18/09) “Because they were cheaper. Because you were less likely to get your face punched in. Because you could play loud music all night.” One of the major landmarks of D.C.'s creative movement was the Kansas House, an unassuming, slightly shabby, single-family home on the corner of a busy blvd. in the heart of North Arlington. For more then a decade (in 2009 the landlord sold it to a condo developer) it had been a center in which people lived, house shows occurred, and according to Tina Plottel, where “we watched X Files all the time”.

Plottel is the mastermind (alongside photographer David S. Holloway) behind the oral history of Kansas House, a project encompassing photographs and interviews with over forty people who in one way or another held a connection to the house. Once completed, it will be housed in the cultural archives of the George Washington University's Gelman Library (Gelman might be the coolest of all college libraries since it's also in the process of purchasing major parts of the Dischord catalog) and be readily available to anyone via electronic access. I spoke to Plottel recently about the project, the reasons behind it, and why Kansas is so much more than just a house.

“The way the project got started was when they said the house got sold. Once it got sold, it was getting sold to a developer, it was very clear what was going to happen […] I had been thinking about doing an oral history of the punk scene, but that's too huge and takes up too much. So I wanted to do something smaller and this is perfect project because not only is it about punk and underground culture, but it is also running along the same sort of timeline of the development of Arlington. It's been happening for a while […] When the metro came in '66 they (the Arlington Government) had a very clear vision of what was going to happen and how neighborhoods were going to change. They were clearly going for this sort of futuristic, high-density look. At least to me it's futuristic. It's not unlike what happens in other places, like Brooklyn […] it's been happening forever.”

So what makes the tearing down of a tiny house in a fairly non-descript suburb worthy of such a passionate undertaking? Because memory through tactile objects is the best kind (why else would you have that shoebox filled with old concert stubs and receipts?) “I'm really curious to explore this idea of what ties people to these things that are so meaningful. Is it a period of time that they're going through? Is it just when you are in your early 20s and are trying to figure out who you are and you're mixed in with these people who are also in the same boat? You're not really an adult, but you are also not a kid. You have these experiences that happen there that are so crucial. […] For fifteen years it happened at this one place and what is it about this one place that was so conducive to this creative expression? And it really stood under the radar for a really long time, all these other things were getting demolished and built up around it, it really stood there.”

Like most things, Kansas didn't start out as a venue but developed into one through a series of events. “Derek [Morton] and those guys moved in maybe 1995 or 1996 and they were the first people who established it as a place. They didn't have parties, but maybe they started having shows. They would have bands play there (including The Dismemberment Plan and Q and Not U). Some people moved out and some people came in and then it became more serious about having shows, to the point where it really became a place where they were a show house. People where going out on tour and playing other show houses and bringing that knowledge back.”

One of the main benefits of having a strong house show community is bands that might not get a slot at more “established” venue still get an opportunity to showcase their music. Although Kansas might have technically been a house it still kept an aura of professionalism. “For what it was, it was pretty professionally run and that is because of the people who lived there. That was what they did for a living. If they weren't at home they were on tour with someone.”

Perhaps a reason Kansas House lasted so long and is held so dear to an assortment of people was the welcoming vibe it offered. “The people who were living there had this crazy creative energy. If you wanted to be part of something like that it was really easy to go there.” Not only did the house bestow a friendly environment, it also provided a cheap one, something key to any struggling artist.

“If you lived at Kansas you were paying like $250 a month. You lived an affordable lifestyle where you could work at a bookstore and go on tour.” Although Plottel never lived at Kansas, her connection to it runs deep. She was first introduced to it via a co-worker at the time. “I worked with someone who played in a band with Derek, who lived there. I was invited through Derek whenever there was a party or whatever was going on. I was then in that loop and met people sort of that way.”

What makes the story of Kansas compelling and one worth telling is that just like a lot of other underground American scenes it became a real basis for an artistic community that included everything from musicians to filmmakers (David Wilson and Bob Massey of “Nitrate Hymnal” were brought together through Kansas House connections). “These things happened because there is a physical space that allows this creative space to exist, and makes these moments happen for people and allows them to sort of fulfill, I don't want to say expectations, but fulfill the potential that they have.”

Although the reign of Kansas House is over, the memories are still alive in the music, photos, and people who once lived and/or attended events there. Now thanks to Plottel and Holloway's efforts, future generations can also experience (and maybe learn from) the magic energy Kansas held. (To learn more and/or donate to the Kansas House project, please visit the Kickstarter page.)