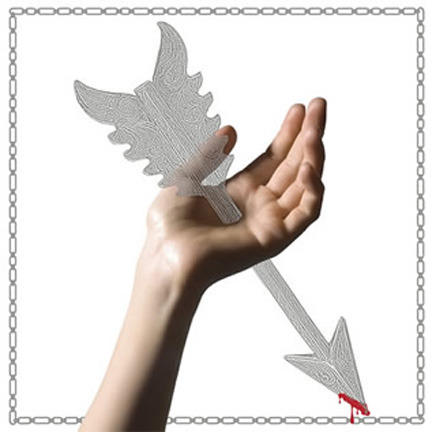 Lights' 2008 self-titled debut on Language of Stone flew far under the radar, but was one of the best albums of the year. At some points it sounded like makeout jams from another planet, at other turns, it was bombastic, and brought to mind Heart channeled through Black Mountain. For some reason, people didn't take notice like they should have, and the album was pushed into a cave and left to adventurous music spelunkers to find.

Thankfully, somebody at Drag City was among those who caught wind of the album, and liked what they heard enough to get the venerable label to release the bands second album, Rites. And giving one spin to Rites, you will take note that Lights didn't get the memo about “sophomore slumps.”

Here we find the group tip-toeing towards weird, cosmic disco territory that could be mistaken for a more stoned version of Glass Candy or Nite Jewel, but somehow retains a feel that this was recorded in a Laurel Canyon garage. When juxtaposed against the previous years output, you quickly realize that everything Lights has done thus far is reminiscent of things you are familiar with, but didn't think could have been combined: Stoner rock, Fleetwood Mac, mirrors on the ceiling, new age mystics, Rolling Stones attempting disco, etc.

The other night, the band played an early set at Mercury Lounge. Admittingly, it was the first time I had seen them in a few years, but what I witnessed on the usually cold, lifeless stage located at 217 E. Houston (sorry Bowery Presents, the “Merc” isn't one of my top venues) was something of an experience that began with the always mind-blowing Robert A. Lowe going under his moniker of Lichens. Lowe has always been one of the more challenging musicians I've known, and deserves credit as one of the finest composers around today. On this night, his dueling microphones/looped screams and yelps made the venue feel like a battle ground between angels and demons; an interesting way to set the stage for a very different type of performance.

Not sure if this is going to become a normal thing, but the addition of Alana Amram, who I've come to know as leader of the The Rough Gems–or, as I like to call them, “the only 'country rock' band that I like in Brooklyn”–was a welcome surprise, though I'm not sure exactly where the former bass player has gone, nor do I know if the band will be calling on the work of their “fourth member” who supplied the ever important “trippy visuals.”

While guitar player Sophia Knapp and energetic drummer Linnea Vedder have their own look and aesthetic that calls to mind Jem (of the iconic band The Holograms) tripping in a field somewhere, Amram looks like the corkscrew-haired muse of Tony Iommi. It's an interesting mix, and adds even more appeal to the band's ever evolving sound and live presentation. While the addition of a new member is never an easy transition to make, the aerobic fist pumps and arena rock poses made the entire set memorable, and (gasp!) fun.

Up next for Lights, home turf Brooklyn show this Saturday, when they play Union Pool. Hopefully it will be chill outside, and the outdoor patio fireplace will be in effect. Amram will be pulling double duty as The Rough Gems open the show. After that, the band hit the road with labelmate Bill Callahan.

PrevPreviousCrystal Antlers cover “It's All Over Now, Baby Blue”
NextScumbag Funk vol. 2Next