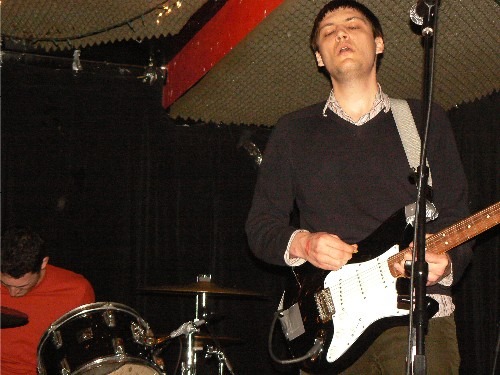 From its inception in Oklahoma to its current New York three-bodied lineup, The Muggabears have tended towards rough-hewn, fragmented chunks of detuned and dark guitar rock. The band has spit out two EPs in the past year, their most recent, Night Choreography, a turbulent seven song flight into their cool, dense atmosphere. IMPOSE spoke with Travis Johnson, Emily Ambruso and Kevin Murphy before their album release party at Cake Shop.

Emily: Once Travis and I did this free-thinking situation for our cat Franklin. We were like, “Franklin goes to jail. Think about it.”

Travis: We were trying to decide on album covers and album titles.

Emily: Little tin cup, and those [prison] stripes on… meow.

Kevin: It's pretty much our songwriting process. They'll come in with an idea, something that could happen with their kitty cat.

Emily: Everything revolves around Franklin.

Was that the idea behind your last EP?

Emily: [spoken at the same time with Travis] NO.

Travis: YES …I guess you just didn't know it.

What were you trying to do with your new EP?

Kevin: It came right after we decided we were just going to do a three-piece. So there was just a lot more guitar writing. When we first started writing for a three-piece, it was just too quiet, too empty, so Travis' guitar parts got a lot thicker.

And there were added layers to the album? I heard synth?

Travis: Actually, on the third track, there's like a farfisa that's pitch-shifted. We were definitely trying to get, we had gotten in almost every review [references to] Pavement and Sonic Youth. We knew that we didn't have to sound as much like them as we did on our last one… we wanted to do stuff at least a little different.

So there's an effort to avoid the old comparisons, but also an organic change too.

Travis: Yeah, and a lot of these three-piece songs came out of jams and even more, piecemail then the other ones, which… they don't sound as stapled together.

Kevin: Maybe we got better or worse at it-

Travis: But they're more stapled together actually… like, here's this part, oh let's put this at the end of that song.

They all came out of jams?

Travis: Not all of them, but more of them, and more parts where we'd have a third of a song done and just jam it into completeness.

Were you trying to put them into pop constructions or just whatever goes goes?

Travis: There were deifnietely moments, like our song “Dead Kid Kicks” is definitely supposed to sound like a beat up blues pop song.

Kevin: That's a riff we had sitting around a long time and tied a bunch of different beats on it, and it was like two, three days before we had to record and we really wanted to have it on the album and we couldn't pull it together. So me and Travis went in and it finally worked. The way it works he'll just keep playing it over and over again until we find a drum beat that's interesting enough.

Travis: And we were really hoping Emily would like it. She was stuck at work that night so next practice [Travis mimes praying to the heavens] done. We like it. Done… We're harder on ourselves, with what we were going to let ourselves play and record.

You're happy with it

Travis: Yeah. A couple weeks after we were done recording it, I couldn't sleep cuz I kept thinking of things I should have done. I'd literally stay up til 3 am being like, thinking like, why did I not think of a keyboard or a guitar?

Kevin: We did seven days straight through, including the last two days to mix and there really wasn't a remix, and we couldn't listen to it, leave and come back a couple days late. Which was fine, it was done. That's the way it was.

Travis: Dan Long recorded us at Headgear. Very good guys. He seemed to get it last time when we recorded with him enough that it made sense to go with him instead of somebody we didn't know at all. It kinda felt to me like hanging out with a bunch of friends for a week, like we all have a similar sense of how to joke around. It was a good time, and when it was over, I felt honestly kinda sad.

Kevin: It was a good way to start the year off. January 1st at 6am, came in a little hungover.

Kevin: We're still getting reviewed off the previous EP. But now that [Night Choreography's out] maybe it'll be the best week ever.

Kevin: I was watching that this morning.

Travis: Unfortunately, I was too.

So you're ready for round three, four five?

Travis: Not even close. It was in the works to have a van by the end of the summer and go on a brief tour by August.

Travis: And then whenever we can from then on. I had a van when we first moved into New York, but I sold it because it kept getting broken into. I had to actually sell it to rebuy a guitar that had been stolen out of the van. So we're going to get a van soon and hit the road, be an actual band outside of New York City.

You sick of the New York thing?

Kevin: We play the Mercury Lounge once and a while. That's fun… we're going to try less around here and more DC and Philly.

Travis: I think we like playing in New York but that's maybe because that's all we really know at this point. I like the idea of showing up at a different place everyday and playing shows to a handful of kids.

Travis: It's a necessary step.