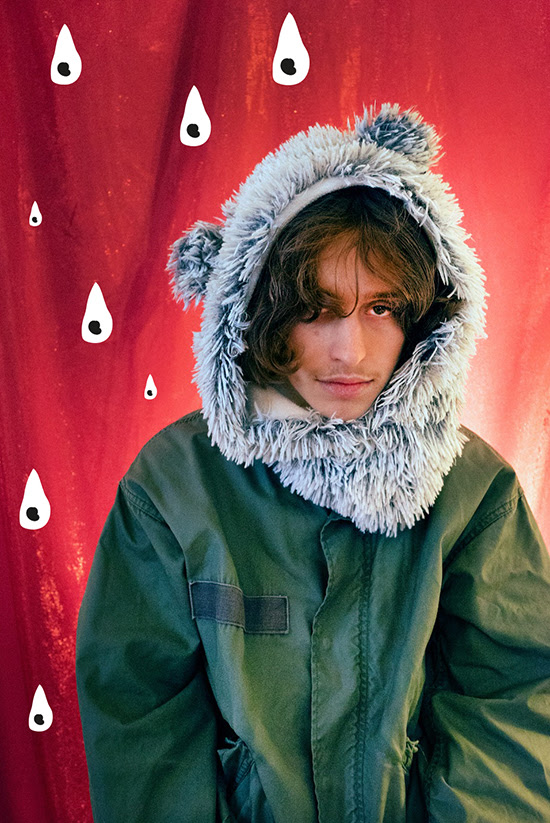 At just 18-years-old, Swedish musician LOVE TRULS dives into adulthood headfirst and hopeful with his first EP Kantande Wanai (order HERE). Well beyond his years, LOVE TRULS has composed a collection of dreamy textured songs, boundless to any genre. The 6-track EP is flooded with narratives of the modern teenage trials of growing up in the 21st century.

Both confident and pedantic, Kantande Wanai, Japanese for “it isn’t easy,” is not only made up of songs written from when LOVE TRULS was 15-years-old, but both the music videos and album artwork were crafted by the artist himself. The EP’s singles, “Trembling Hands,” “ADULT,” and “Torn Up Dress,” serve as propelling introductions to the experimentally progressive EP. Throughout the listening experience the likes of King Krule and Tame Impala, the musician’s biggest inspirations, can be found alongside resemblances to psych-rock staples Mild High Club and Sugar Candy Mountain.

You can read about LOVE TRULS’ music-junkie parents, his experience playing his biggest single to a homeless man, and the catharsis of releasing music from his adolescence, below:

Being so young, how has your entrance into the music industry impacted you as a musician?

Not much, to be honest. I have made music for as long as I can remember. I have only been actively releasing music during the pandemic, meaning I haven’t been able to perform or do anything different from what I usually do. I still record my songs in my room at my dad’s place, and I don’t think my writing style has been affected by the industry. I have severe trouble focusing when people ask me to do things, so if my label has asked me to write songs of a specific kind, it probably flew over my head anyway.

What are you most excited for listeners to discover on ‘Kantande Wanai’?

I’m specifically proud of the instrumental parts on “Tell Her” and “Commit,” I feel that we are stretching the limits for pop music at least a little bit there. In general, I’m excited to finally get to release the songs that I’ve had for such a long time and to be able to focus on making new music. I think the EP, even though it’s put together from so many different times in my life, finally assembles a nice collection of songs that really sums up that era. Sound-wise I’m excited to release even more dreamy sounds and videos, and I hope I can move a few steps closer to the dreamy sound in the future.

Describe your creative process for this project

Making music and being creative are natural elements for me. However, it has to come forceless to me; otherwise, I can’t genuinely enjoy the process in that euphoric way, at least when I’m making my own music. When making a song, I often have a very clear vision in my head of what the song is and how everything should sound, and then I just try to get it down to the project. Sometimes I just have a drum loop in my head or another fragment for a song, and then I just let the rest play around with the rest, almost like filling in the empty spaces in a coloring book.

I understand some of your influences are indie’s King Krule, Tame impala and Idris Muhammad; what about these artists are you so connected to?

To me, that’s three different types of music. I think what binds them together is that they put so many strong feelings into their music, and I’m certainly feeling a lot while listening to them. In different ways, of course, but there’s also something invisible that unites those feelings in an almost religious way, like a higher power that only music has access to. King Krule makes me happy, sad, and angry. Tame Impala makes me uplifted, fulfilled, sad but strong. Idris Muhammad makes me happy and melancholy,  but not in a bad way, in a constructive way.

How has being from Sweden influenced you as a musician?

I honestly don’t know. Naturally, where I’m from has influenced me and my music, but it’s hard to pinpoint exactly if we’re talking sounds and how my music comes out. I grew up in a home with both my parents being full-time musicians. I think my dad did all he could to indoctrinate me musically. I guess I’m among the few kids that had to tell my parents to turn down the volume all the time.

On “Trembling Hands” you feature Siri Gunrup Järvinen, who is a childhood friend of yours. How was it making that song with someone you are so close to and what this single means to you?

“Trembling Hands” was one of the first songs I ever made and that I recorded and finished for real. Two years later, I played it for a homeless man, don’t ask why, and he told me that he didn’t like my singing and that the song needed a girl’s voice. I took his rude advice and immediately called Siri, who was happy to participate. Even though I had never heard her sing before, I knew it would turn out beautifully, and so it did. She has a lovely voice.

You said some of the tracks on the EP were from when you were 15-16 years old. Revisiting those tracks, have they evolved or changed meaning for you?

Yes, for sure! It’s always interesting to look back at things you’ve made, especially during a period of time where the songs just came pouring out of me. I find it interesting to see how I expressed myself through the music at the time. I wouldn’t say that songs have changed meanings for me, more like the meaning has become more evident to me as the years have gone by.