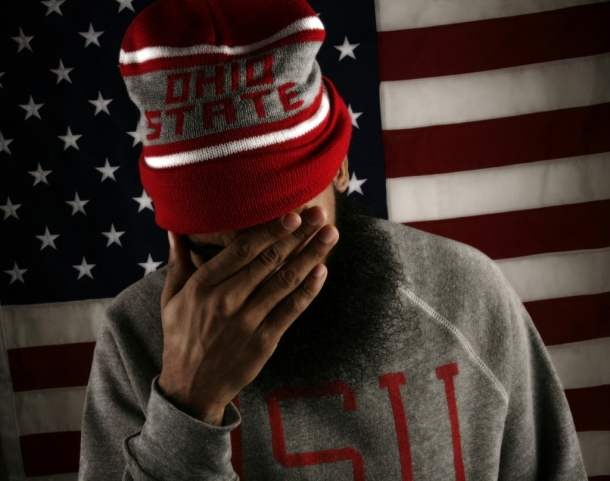 Massillon MC Stalley is repping hard for his small town Ohio upbringing. His Lincoln Way Nights (Intelligent Trunk Music) is an homage to the town's car culture and a life lived before moving to Queens. Stalley took the time to share some of those experiences which included guarding Lebron James in high school and growing up in one of America's most renowned football towns.

Being that you’re
born in Massillon, OH did you get one of those little footballs placed in your
crib, like in the Go Tigers! documentary?

[Laughs] I got a couple of those actually. Growing up I got
a lot of them period. It’s a tradition that is still going on.

An injury prevented
you from playing college basketball. Have you been able to recover and still
hoop occasionally since the injury?

Oh yeah, I play every Wednesday here in New York. I play in
this Nike league. It’s a tournament league. I wouldn’t say it’s very
competitive, there’s some athletes there and there are some people who aren’t
really athletes. It’s definitely a good way to get out, keep the cardio going
and just play ball and have fun.

Are there any other
rappers or noteworthy people in the league?

I’m the only rapper but there are a lot of people who are
working professionals within the entertainment industry. They are more of
behind the scenes type though. Everybody works at Nike corporate or employees
at ESPN, XXL magazine, Slam magazine… you know… people from BET and MTV.
Everybody’s in the league. That’s where you get some people who have played and
others who are just out there to play and network.

Have you ever played
against another rapper in basketball?

Naw. Not yet unfortunately. I’m looking for’em though, man.
I’m trying to find somebody who’s good or as talented as they claim to be. A
lot of rappers say they can play and I want to see.

When I read the
Complex interview with Kanye and I learned that he played ball before each
studio session with his G.O.O.D. music crew and collaborators, I couldn’t help
but wonder about the level of play that went down. They don’t seem like
athletes.

Yeah, if they was playing a game of 21 it probably took them
21 hours. They don’t look like they could shoot a ball at all. That seems like
a hacking session.

You got to play
against Lebron James in high school. How did that go for you?

It didn’t go too well. We lost. [Laughs] He pretty much dominated the game. It was fun like any game
in high school I enjoyed playing against all types of athletes, but Lebron was
definitely someone who I enjoyed playing against. I can’t really say… I mean,
they beat us. They were top ranked in the state at the time. We were ranked at
the time, but they got the best of us. He was everything he was advertised to
be.

Did you play against him all four years?

Yeah, we played against each
other all through high school.

So you got to witness Lebron fall from grace and lose at State his
junior year and come back even more determined in his senior year.

Yeah I got to witness that
all. One of the things I was so impressed by was his work ethic. When I first
played against him as a freshman he was tall, had natural talent and was very
gifted, but his frame was small. He was a tall boney dude.

Yeah, and he walked with his feet out too.

Yeah, he was bow-legged and
pigeon-toed… he still is bow-legged and pigeon-toed, but he was just kinda
goofy… well, not goofy, but he was weird looking. He had a little nappy-fro and
everything. He just looked like Ichabod Crane or somebody. My coach was always
hyping him up and like Bobby Huggins (coach at University of Cincinnati) was
saying if he had him right now, he would start and this is when Bobby Huggins
had the best team in the country.

Seeing him in warm-ups you
could see that he was good, but it was like he can’t be as good as everybody is
claiming. He was definitely that when he hit the court.

Like I said, seeing the
growth from his freshman year to his sophomore year he came back cut up. You
could tell he really took the off-season serious. Lifting weights. Working out.
Eating right. He was dedicated.

That’s just what Massillon
is. Massillon is very prideful, even within the state. We’re a small town in
Ohio and we get overlooked or we’re just known for high school football. I just
want people to be aware that there are other great things that come out of
Massillon besides a football player or a basketball player.

That’s just my main focus
with putting us on because there are a million other little cities like
Massillon in this world that make America move. I just want to let people know
they can live the American Dream and the American Dream is everywhere. It’s not
just in New York and LA and these big cities.

I read in an MTV interview that you strive to be more than an MC, but
that you want to be known as a great American writer. Considering you also
studied creative writing and English in college, how far are you trying to take
that vision?

Do you think you’ll get back to contributing to your Milq And Rookies blog on Slam
magazine?

Yeah I do. I think about it
constantly, but at the time I don’t have time to sit down to write like I would
like to. One thing about Slam is they take that column very serious. They want
you to think about what you’re writing, have more than 500 words. I’m trying to make sure when I do write it is something valid and
something correct.

With your record Lincoln Way Nights, what concept are you working with?

To go in depth, it’s based
off of Massillon. It’s the story of me growing up. The events I’ve seen, the
people I’ve come across, the relationships I have from someone like my mother
to an older head that taught me something from just standing on the block or
the relationships I’ve been through. Lincoln Way is a real street in Massillon
that runs to Canton and eventually turns into Tuscawaras, I believe.

Lincoln Way is also a street
that in the summer time on Fridays and Saturday nights, people will pile up that
strip with their old school and new school muscle cars that have tricked out fluorescent
light sets and candy painted Cadillacs with big wheels, you can find any type
of car riding up and down showcasing. Everybody listens to loud music and they
might pull into a K-Mart parking lot or a gas station and open up the trunks
and doors to let people see the systems, the amps. It’s something that brings
out the city and people in enjoy it whether they like cars or not.

You’ve got people who may be
21 years old and somebody who’s 81 years old that has a muscle car. I think
that’s a beautiful thing too because it unites cultures, generations and
different races. That culture is big and I wanted to bring that out in the
music. Also the Intelligent Trunk Music
part is about riding around, playing music loud, but I bring the intelligent
part into it where the music is done intelligently so it sounds like an
orchestra or a symphony. The lyrics are conscious and I’m bringing dope
concepts. That’s basically it.

I was not aware of this until recently, but you’re part of the group Center
Edge Territory with Mos Def, Curren$y and Jay Electronica. What are the chances we hear a song from that
project soon?

Yeah, very correct. That was
Mos Def’s idea and he asked me to be a part of it. Mos is one of the first
people I met three years ago who gave me that nod and told me to keep doing it.
For him to reach back and tell me he’s got a group I need to be a part of it and that even though they’ve recorded songs
already I can throw a verse on everything we’ve done is like… hell yeah. No
question about it.

I was speaking to Ski (Beatz) the
other day and he was thinking about dropping some stuff off of it. I was of
course encouraging him to, so hopefully. Everybody is doing their own thing.
Curren$y is a busy man. Jay Elec just signed with Jay-Z [and Roc Nation] and he’s
a busy man. We all know Mos is a busy person. Myself, I’ve been busy trying to
get Lincoln Way Nights together and put it in the right places, so once we get
back together I’m sure it’s going to be love and we’ll make more music to get
out.

Are you following the OSU Buckeyes being number one in basketball right now?

Hell yeah, I’m loving it. It’s
been a long time since we’ve been number one in basketball.

Yeah, with the way they are
playing they look solid. They got good pieces. They got good role players. The
bench is solid. Sullinger is showing me a lot more than I expected. He’s
definitely hands down the best player in the country right now. I could see
them going undefeated even. Thad Matta has been a doing a good job of
recruiting there.

And recruiting within the state too, which gives it more meaning.

That’s my big thing right
there. I absolutely love that. For so many years we’ve let good guys get out of
this state. Even myself, I left. When I think about it I kind of kick myself
for it. As a kid, I was like get me the fuck out of here, but at the time I
wanted to go to Syracuse.

When you committed to University of Michigan did you get a lot of
traitor comments from your people back home?

Oh yeah. I don’t know if you
heard of a guy named Shawn Crable, but he was a high school teammate of mine
that played outside linebacker at Michigan. He talked me into going there. I
kept it real. I just wanted to get out of Ohio, but he said things like “I’ve
been playing with you guys all my life, now I want to play against you guys.”
So people really went at him about being a traitor.

Stalley's “Lincoln Way Nights (Intelligent Trunk Music)” came out February 8. He will be performing multiple showcases at SXSW in March.