Now, don’t get me wrong: I love the three-guitar-chords-and-throat-yelled-raw punk template as much as anyone. A lot of terribly exciting developments have come out of people diving into music without the restriction of conventions like actually knowing how to play their instruments or sing. And yet, lately, I’ve been noticing more and more acts bringing serious jazz or classical backgrounds into wildly eclectic projects playing right along side noise-rock and post-punk bands. The rock band vs. “serious” music divide has been fading for years, and artificial all along, but it still seems like some especially thrilling examples of bands tearing straight through it have come up rather recently.

Brooklyn noise/jazz/classical/rock ensemble Zs is a good example, playing heavy noise stabs and jolting time changes from complicated written scores. Extra Life, the new project of ex-Zs guitarist and frequent song-writer Charlie Looker may be an even better one. The quintet, which incorporates violin and saxophone along with a more traditional rock setup, resembles Zs at its most viscerally involving (many of those compositions were, in fact, Looker’s anyway) but sacrifices none of the complicated timing variation and dissonance. It’d be exciting music alone, but what really tethers these newest songs in place is Looker’s well-trained voice, vaulting up and down the register even within a single word and bringing frayed emotion to the forefront. Comparisons will inevitably be drawn to the Dirty Projectors’ David Longstreth, who practices a similar vocal trick (and also possesses a talent for rendering all genre boundaries meaningless), but Looker’s style seems more rigorous, channeling the monophonic song of medieval religious chant and troubadour tradition. What started out as imitation has apparently now given way to a close study of theory, and the results, with Looker’s voice carrying monolithic weight over the band’s often dissonant lurches and stabs, are strikingly unique.

Friday’s set, bringing the new Extra Life repertoire (honed for the debut album, Secular Works due at the end of February) to a full but mercifully not packed audience at Death By Audio, consisted of only six songs (though several were quite lengthy), touching a more diverse range of styles than early full-band Extra Life shows last fall, and seemingly calculated to leave everyone craving more. It worked.

The set opened with a monophonic statement of purpose, Looker’s voice leaping alone before the crowd, before the band dropped into a jolting Extra Life archetype which might be called “Spend It All”, with bass, drums, and keys fusing in heavy stabs that skipped and flitted in endless intricate rearrangement. If there was any question as to why the band needed sheet music, it was dispelled immediately. This was followed by one of the oldest Extra Life songs, played regularly for solo guitar a year ago, “I’ll Burn.” Some of the song’s sparse frailty and power had seemed diluted by the full band treatment before, but this time everything seemed perfectly in place, shiver-inducing, heart-breaking.

An interlude of two new, shorter works followed suggesting what Extra Life might sound like as more standard rock outfit (though Looker’s vocal style is still unmatched even with less spastic, dissonant accompaniment). These tracks served as a respite, a palette-cleanser before the primal, devastating set-closer “I Don’t See It that Way”. Combining almost metal-like harshness in rolling instrument stabs with a constant variation of cadences, stutters, and subtle rhythms, the track recalls some of the best Zs work (see the upcoming Hard EP, also due this spring), while making it sound completely fresh again. Precision bone-crushing.

I realize this may sound like hyperbole, but have you seen this band? Go, then decide if I’m exaggerating. They’ll be playing at least once more in Brooklyn before leaving on tour, February 22 at Union Pool.

Continuing with our highly-skilled-musicians-in-pseudo-pop-song-format, we arrive at headliner People, whose Mary Halvorson (guitar) and Kevin Shea (drums) both play with a number of jazz and improvisational projects. Notably, Shea plays in the Peter Evans Quartet, whose self-titled album somehow turned up at 23 in Wire’s surprisingly eclectic top 50 albums of 2007 (well ahead of Radiohead, just behind Lil’ Wayne), and Mostly Other People Do the Killing, while Halvorson just turned up at Issue Project Room two weeks back in a trio combining compositional and improvisational tendencies.

Together, they’re surprisingly tethered in regular familiar song formats, Halvorson’s voice floating, airy and well controlled (singers who can sing?! When did this happen?) over strums of guitar and an unending chatter of percussion from Shea. Those drums are remarkably frenetic, though, especially given that Shea keeps them from ever overwhelming the rest of the components, despite playing about twice as many beats as the songs would seem to require. For her part, Halvorson’s guitar flirts with dissonance and odd chord shifts; combined they manage to be simultaneously smooth and epilepticly jolting.

As the Cardboard party, there would naturally be expected to be at least one Cardboard Records band on the bill, and that came in the form of BJ Warshaw’s side project from the rigors of Parts & Labor, Shooting Spires (originally, there had been a Looker-included Zs album slated for release on Cardboard, the afore-mentioned Hard EP, but that album is now being handled by the Locust’s own label).

In any event, Warshaw was debuting the new full-band incarnation of his Shooting Spires project, a shift which made his live performance a little more visually stimulating, but also diluted some of the warm spontaneity and gauzily layered noisiness that had marked Warshaw’s solo album.

All told, they sounded a little closer to Parts & Labor in this format than previously, which was both predictable, I suppose, and not really unwelcome. And whereas Dan Friel seems to have taken over most of the synthesizer duties in P&L, here, Warshaw was free to tweak out blurting melodies of his own once again. Back in the less ambiguous rock camp, but nonetheless one of the better bands in that camp. 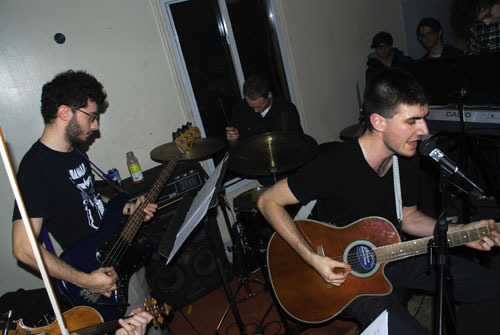 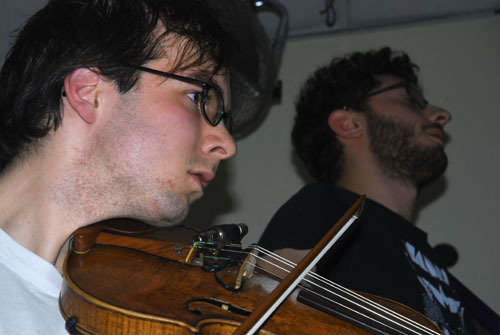 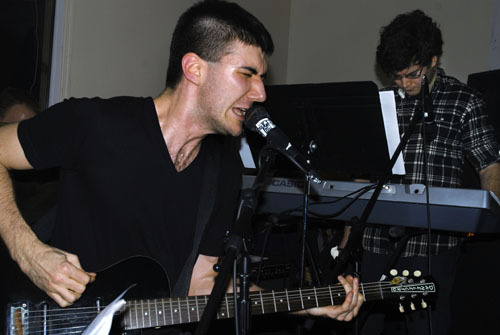 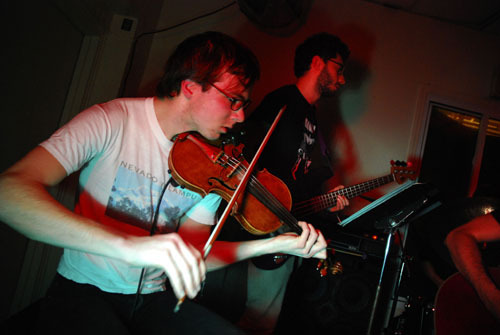 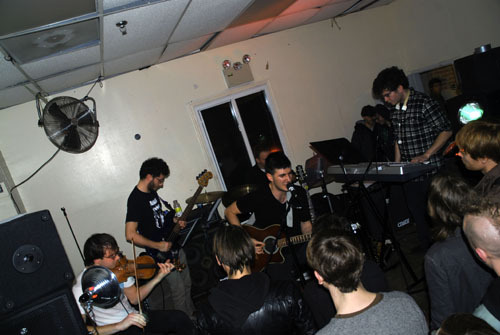 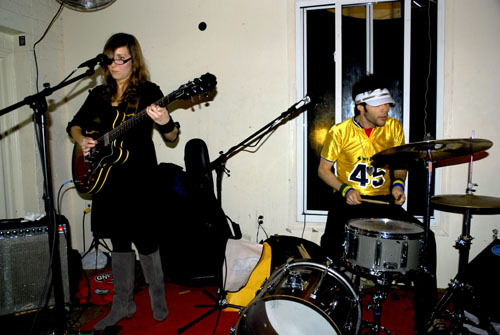 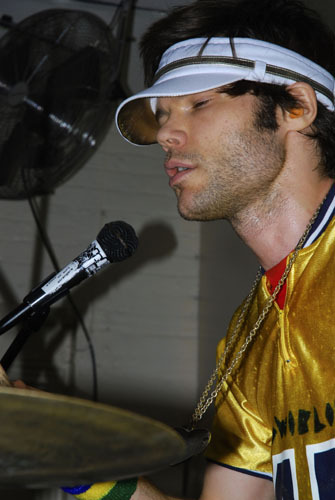 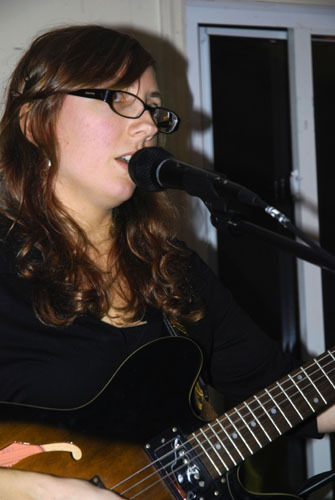 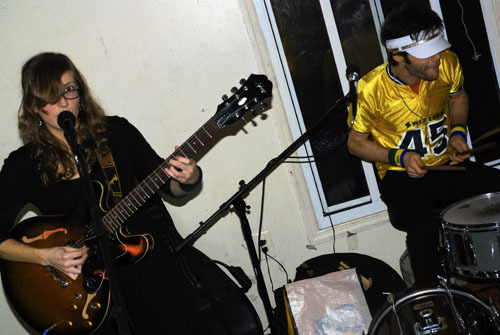 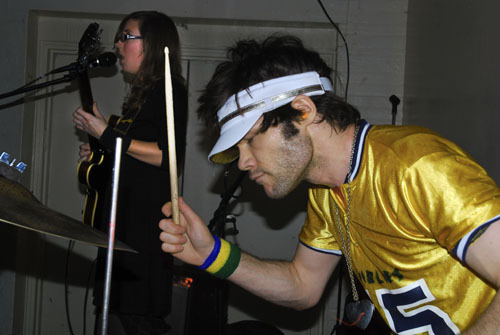 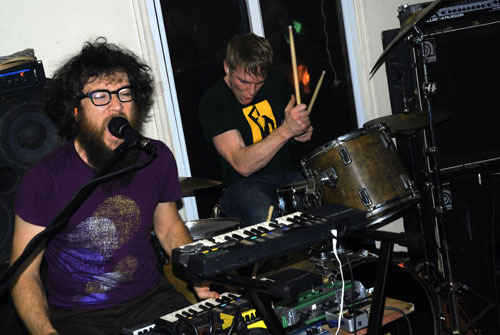 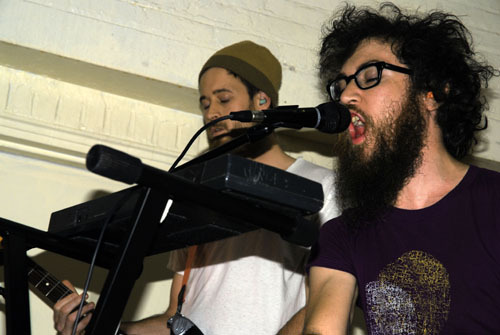 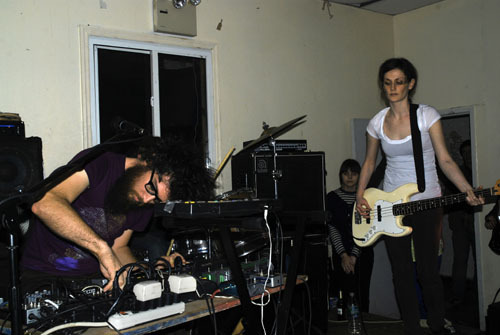 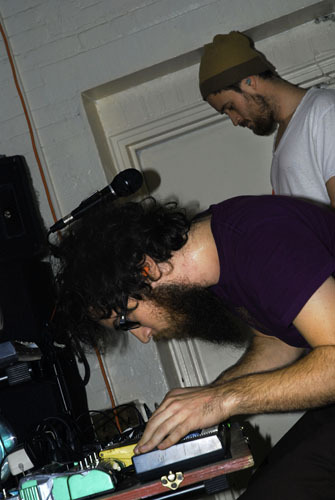 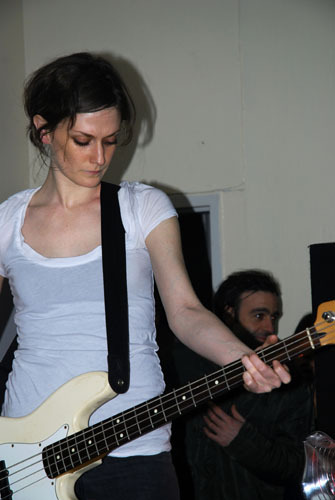 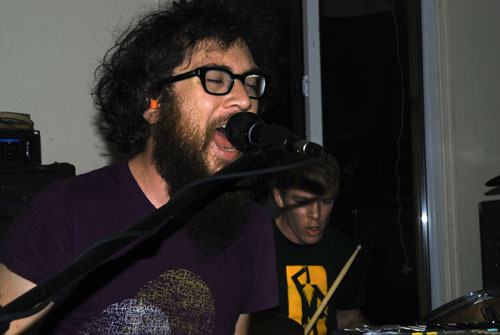 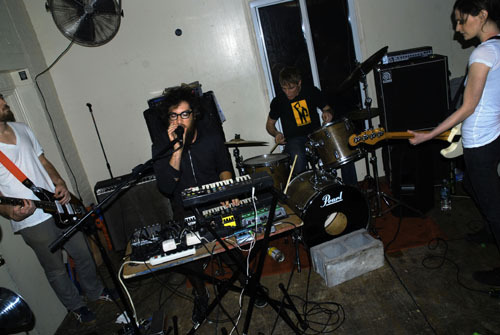 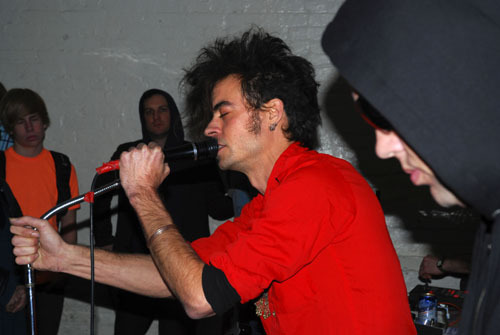 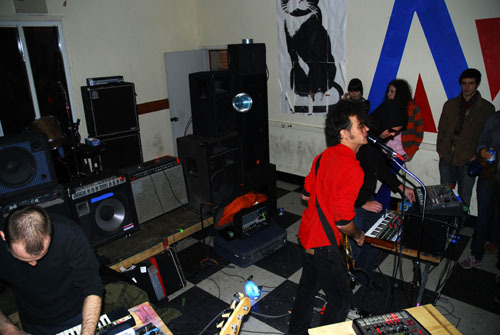 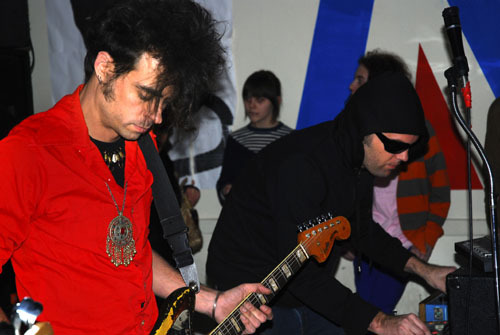 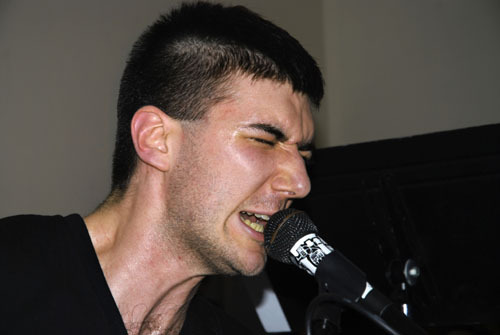