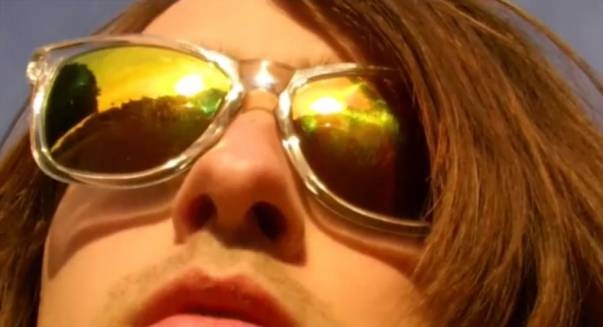 The sunset city of Los Angeles is explored through the eyes, and plastic vampire teeth of guitar-dream-weaver Keith Canisius with cinematographic assistance from Allan Nicolaisen as they debut their visual treatment for "Home By Five".

The guitar progression brings the feel of being a tourist exploring new terrains and inner inquries of identity in relation to place, region and all the beautiful dissonance that occurs in between. "I don't know just who I am, standing here in a different land, now." Explore LA after five o'clock, where the colors of orange and yellow bounce off the glare of sunglasses, power lines, palm trees, and a beachside chalet. Somewhere too in that fabled city of angels exists one of the world's last yellow receiver pay-phone to call home while the guitar quips allude to lands of the Far East.

The LA skyline gets crystallized in amber from Nicolaisen's lens as the iconic vast Southern California empire appears foreign to even those most familiar with it's unrelenting sprawl. Watch as the streets, sidewalks and footprints in the sand resemble a moon-like terrain as you "trip back" and watch the 9-to-5 grind get spun to a "new high", or a "true high", equipped with a plastic pair of Count Dracula's choppers to frame the fun. Keith further explained the home in time for dinner philosphies while living between the States and Europe, along with Allan's vampirical film aspirations as a travel excuse for customs.

"Home By Five" is about moving from place to place a lot, before getting used to the home-by-five lifestyle. My family and I moved from the USA to Europe years ago. It's kind of ironic, as we always talked about escaping the 9AM – 5PM lifestyle. We kind of like it now that we've gotten older.

Allan Nicolaisen is a good friend of mine and made this video. He also appears in the video, which was filmed in LA. We both have a fascination with California and often talked about going there to live. My plans of course changed once I met someone and started a relationship.

Allan actually used the video as an excuse (got held at the airport) to go to California, frequently saying he was making a "vampire movie".